Focal-plane shutter. A focal-plane shutter is positioned just in front of the film (for film cameras) or image sensor (for digital cameras), in the focal plane, and moves an aperture across the film until the full frame is exposed. Focal-plane shutters usually use a pair (or more) of light-tight cloth, metal, or plastic curtains. For shutter speeds lower than a certain point (known as the X-sync speed of the shutter), which depends on the camera, one curtain of the shutter opens, and the other closes after the desired exposure time. At shutter speeds faster than the X-sync speed, one curtain of the shutter travels across, with the second curtain following behind, effectively moving a slit across the focal plane until each part of the film or sensor has been exposed for the desired time. The effective exposure time can be much shorter than for central shutters, at the cost of some distortion of fast-moving subjects. 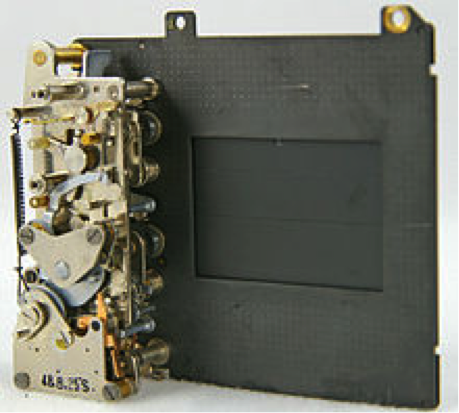 Figure 3, A focal-plane shutter. The plastic curtains travel vertically in this case.

Comparison between focal-plane shutters and other shutters. There are two main advantages of focal plane shutters: (i) they are built into the camera body and allow the use of interchangeable lenses without requiring a separate shutter for each lens (diagpragm shutters behind the lens also allow interchanging the lens using a single shutter.); (ii) they can achieve very high shutter speed as compared to diaphragm shutters and simple leaf shutters.

The disadvantages of focal plane shutters are: (i) Distortion of fast-moving subjects: although the whole film or image sensor is exposed for the correct period of time, one edge of the film or sensor is exposed earlier than the other. If the subject is moving fast, this would couse elongate, shorten or distort the image depending on the relationship between shutter and subject moving directions; (ii) The complex mechanical structure causes shorter lift-span, and they are usually noisier; (iii) Camera shake due to the impact of the larger curtains starting and stopping rapidly. Camera designers have learned to overcome SLR mirror-slap by including a mirror lock-up feature in some cameras. This removes the camera-shake from the large slapping mirror inside the camera, but does not prevent camera-shake caused by the shutter mechanism itself.

The main advantages of central and behind-the-lens leaf shutters compared to a focal-plane shutter are: (i) Flash synchronization is possible at all speeds because the shutter opens fully, unlike a focal-plane shutter sliding a slit relatively slowly across the film for a short effective exposure; (ii) Small size is possible as the shutter is placed where the bundle of rays is narrow, either inside or just behind the lens; (iii) Usually have longer shutter life-span and are much quieter; (iv) More accurate photographs in high speed follow-through—lateral focal plane shutters compress or elongate the image in such cases.

Electronic shutter. Digital image sensors (both CMOS and CCD image sensors) can be constructed to give a shutter equivalent function by transferring the imaging pixel cell charges to paired pixel cells that are shaded, which is referred to as frame transfer shutter. If the full-frame is transferred at once, it is a global shutter. Often the shaded cells can independently be read, while the others are again taking image. Extremely fast shutter operation is possible as there are no moving parts or any serial data transfers. Global shutter can also be used for videos as a replacement for rotary disc shutters. Image sensors without a shaded full-frame double must use serial data transfer of imaging pixels, which is called rolling shutter. A rolling shutter scans the image in a line-by-line fashion, so that different lines are exposed at different instants, as in a mechanical focal-plane shutter, so that motion of either camera or subject will cause geometric distortions.