The primary source of error in capacitance measurements is stray capacitance, which if not guarded against, may fluctuate between roughly 10 pF and 10 nF. The stray capacitance can be held relatively constant by shielding the (high impedance) capacitance signal and then connecting the shield to (a low impedance) ground reference. Also, to minimize the unwanted effects of stray capacitance, it is good practice to locate the sensing electronics as near the sensor electrodes as possible.

3, Surface Acoustic Wave Touchscreen technology. The surface acoustic wave (SAW) touchscreen consists of a glass sheet with sound wave transmitting transducers, receiving transducres and reflectors as shown in Figure 6. One pair of the transducer-receiver is used to detect the touchpoint along X-axis, ther other pair for Y-axis. SAWs are sent out from the transmitting transducers, and traveling along the edge of panel. The reflectors located along the edge of the panel change directions of part of the SAWs by 90 degrees (each reflector reflected a part of the SAWs with the rest transmitted), thus the SAWs travel over the panel. Once the SAWs travel across the panel, their directions are changed again by the reflectors located on the other side, and are detected by the receiving transducers. Once the SAWs are received, they will be converted into electric signals by the receiving transducres.

As shown in Figure 6, each pair of reflectors determines one route that part of the SAW travels, and all routes have different distances. This means the SAWs travel along these routes will reach the receiver at different time. When a finger touches the screen, the soft finger will absorb the SAW at that point, so the receiver will not receive the SAW along this route. Combining results from the two pairs of transmitting-receiving transducers, one can determine the position of the figer touching the screen.

Pros and Cons: 100% transparency can be achieved as no extra layers are present on the screen. It can be operated using passive devices like stylus, glove or finger nail. Screen can get contaminated with much exposure to dirt, oil which may haunt its smooth functioning. 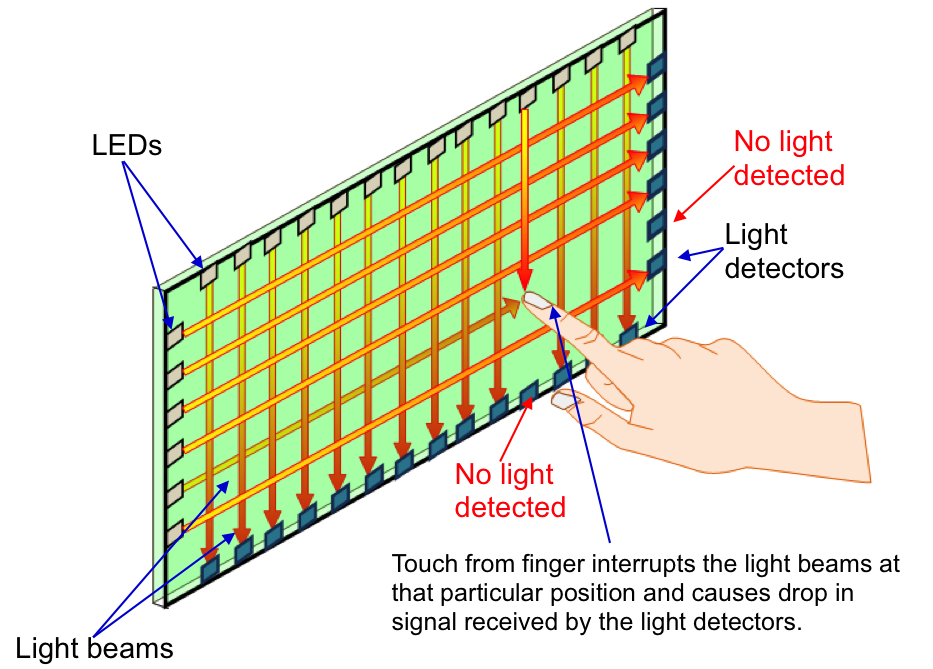