Theories of light in the 17th and 18th centuries: Understanding the nature of light has gone through a winding path. In the 17th and 18th century, a wave theory of light was proposed by a number of scientists, including Robert Hooke, Christiaan Huygens and Leonhard Euler.[1] However, Isaac Newton, who did many experimental investigations of light, had rejected the wave theory and developed his corpuscular theory of light, which suggested that light is emitted from a luminous body in the form of tiny particles. Newton’s theory was predominant for more than 100 years and took precedence over the earlier wave theory. Partly because of Newton’s great prestige, the theory held sway until the beginning of the 19th century despite the fact that many phenomena, including diffraction, interference and polarization of light diffraction effects at edges or in narrow apertures, and the apparent failure of light particles crashing into one another when two light beams crossed, could not be adequately explained by the corpuscular theory.

Young’s work on wave theory: While studying medicine at Göttingen in the 1790s, Thomas Young wrote a thesis on the physical and mathematical properties of sound.[2] In 1800, he presented a paper to the Royal Society (written in 1799) where he argued that light was also a wave. Despite much skepticism because it contradicted Newton’s theory of light, he continued to develop this idea, believing that it could much better explain many aspects of light propagation than the corpuscular model:

“A very extensive class of phenomena leads us still more directly to the same conclusion; they consist chiefly of the production of colours by means of transparent plates, and by diffraction or inflection, none of which have been explained upon the supposition of emanation, in a manner sufficiently minute or comprehensive to satisfy the most candid even of the advocates for the projectile system; while on the other hand all of them may be at once understood, from the effect of the interference of double lights, in a manner nearly similar to that which constitutes in sound the sensation of a beat, when two strings forming an imperfect unison, are heard to vibrate together.”[3]

In 1801, he presented the famous paper to the Royal Society entitled “On the Theory of Light and Colours”[4] which described various interference phenomena, and in 1803 he performed his double-slit experiment (strictly speaking, a double-hole experiment).

“Supposing the light of any given colour to consist of undulations of a given breadth, or of a given frequency, it follows that these undulations must be liable to those effects which we have already examined in the case of the waves of water and the pulses of sound. It has been shown that two equal series of waves, proceeding from centres near each other, may be seen to destroy each other’s effects at certain points, and at other points to redouble them; and the beating of two sounds has been explained from a similar interference. We are now to apply the same principles to the alternate union and extinction of colours.” 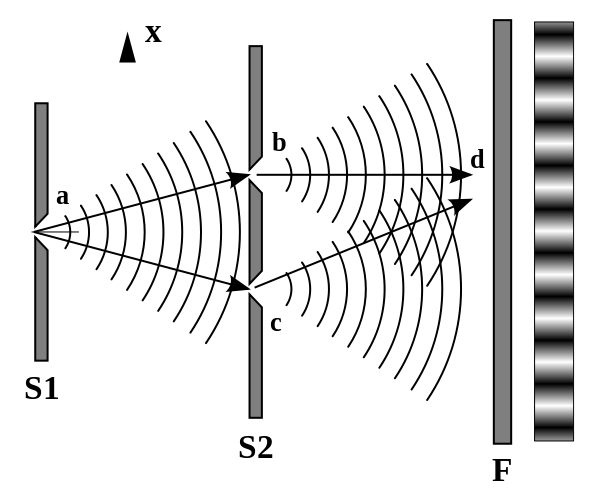 “In order that the effects of two portions of light may be thus combined, it is necessary that they be derived from the same origin, and that they arrive at the same point by different paths, in directions not much deviating from each other. This deviation may be produced in one or both of the portions by diffraction, by reflection, by refraction, or by any of these effects combined; but the simplest case appears to be, when a beam of homogeneous light falls on a screen in which there are two very small holes or slits, which may be considered as centres of divergence, from whence the light is diffracted in every direction. In this case, when the two newly formed beams are received on a surface placed so as to intercept them, their light is divided by dark stripes into portions nearly equal, but becoming wider as the surface is more remote from the apertures, so as to subtend very nearly equal angles from the apertures at all distances, and wider also in the same proportion as the apertures are closer to each other. The middle of the two portions is always light, and the bright stripes on each side are at such distances, that the light coming to them from one of the apertures, must have passed through a longer space than that which comes from the other, by an interval which is equal to the breadth of one, two, three, or more of the supposed undulations, while the intervening dark spaces correspond to a difference of half a supposed undulation, of one and a half, of two and a half, or more.”

In 1817, the corpuscular theorists at the French Academy of Sciences, which included Siméon Denis Poisson, were so confident of their theory of light that they set the subject for the next year’s prize as diffraction, being certain that a corpuscular theorist would win it.[2] Augustin-Jean Fresnel submitted a thesis based on wave theory and whose substance consisted of a synthesis of the Huygens’ principle and Young’s principle of interference.

Poisson studied Fresnel’s thesis in detail. Being a supporter of the corpuscular theory of light,  he of course looked for a way to prove it wrong. Poisson found that a consequence (prediction) of Fresnel’s theory was that, if you placed a circular obstacle in front of a point source of light, there would exist an on-axis bright spot in the middle of the shadow. On the other hand, the corpuscular theory of light predicted that there should be complete darkness, which seemed more intuitive. Poisson then declared that Fresnel’s theory could not be true as “surely this result was absurd”.

However, the head of the committee, Dominique-François-Jean Arago thought it was necessary to perform the experiment in more detail. He molded a 2-mm metallic disk to a glass plate with wax. To everyone’s surprise, he succeeded in observing the predicted spot, which convinced most scientists of the wave-nature of light. In the end Fresnel won the competition. After that, the corpuscular theory of light was vanquished, not to be heard of again till the 20th century.

Note that this phenomena is not easily observed in every-day situations, because most everyday sources of light are not good point sources.