A commonly used analogy to help understanding the serial readout of a CCD image sensor is shown in Figure 2. Here the intensity of rain falling on an array of buckets varies from place to place, similar to the various light falling on an imaging sensor. During an integration period, the buckets collect various amounts of signal (water). They are then transported on a conveyor belt in stepwise fashion toward a row of empty buckets that represent the serial register, and which move on a second conveyor oriented perpendicularly to the first. As shown in Figure 2(b), an entire row of buckets is being shifted in parallel into the serial register. The serial shift and readout operations are illustrated in Figure 5(c), which depicts the accumulated rainwater in each bucket being transferred sequentially into a calibrated measuring container, analogous to the CCD output amplifier. After all buckets on the serial conveyor have been measured in sequence, contents in the next row of buckets are then shifted and measured. The process is repeated untill the contents of all buckets have been measured.

Such as full-frame CCD architecture is often said to have 100% fill factor, as the entire pixel array is used to detect incoming image during exposure. This is in contrast to other CCD sensor architectures disscussed below. Note that in the full-frame architecture, the pixel array is used for both image detection and readout, a mechanical shutter or synchronized strobe illumination scheme must be used to prevent image smearing. Smear occurs when the photodiodes are continuously illuminated during parallel register readout, and will be oriented in the direction of charge transport through the parallel array.

In the frame-transfer CCD architecture, the photodiode array is divided into two identical parts. One is used for imaging and the other as a storage region and is protected from light by a light-tight mask. Incoming photons fall on the uncovered portion of the array and the accumulated charge is then rapidly shifted into the storage region for charge transfer to the serial output register. While the image data is being read out from the storage region, the uncovered portion can be used to take the next image. 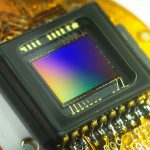 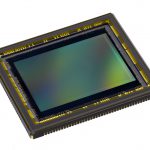