Many of us use laser printers on a daily basis. We know that it turns digital data on our computer into letters and images on the paper, but how does it actually work? what are the processes involved? This is different from the case of inkjet printers, where the names says it all. Tiny jets of ink are injected onto the paper to produce what we see. The term “laser printer”, on the other hand, is a bit confusing. How can a beam of laser prints letters and pictures on paper?

The major components of a laser printer (besides the electronic circuits) include: (i) the Laser Unit; (ii) the Photoreceptor Drum Assembly; (iii) the charging Corona Wire; (iv) the Toner Hopper; (v) the Fuser unit. See Figure 1 for a schematic of these components in a typical desktop laser printer. 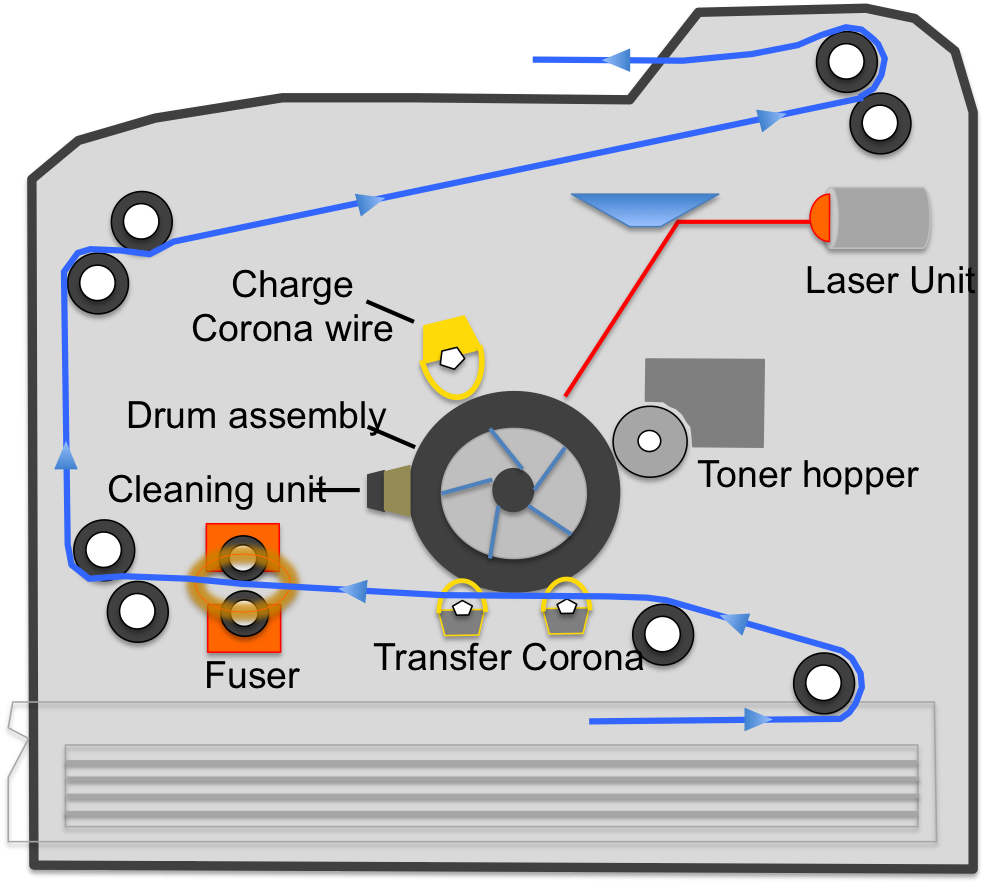 When we print something, an electronic unit in the laser printer receives the digital data from a computer and figures out how it should look like on paper. It then directs a laser beam (through a reflecting mirror) to scan back and forth across the photoreceptor coated drum while it rotates, building up a pattern of charges (rather, a pattern of lack of charges as explained below). The drum, which continues to rotate, then picks up a kind of powdered ink called toner and presses the pattern onto the paper. Finally, a fuser unit bonds the toner to the paper by heating it up.

The Photoreceptor Drum Assembly: During printing, the drum rotates step by step while a charge corona wire on top induces (say, negative) charges on the drum surface. This is done by a large voltage applied to the charge corona wire. (Some printers use a charged roller instead of a corona wire to apply charges on the drum surface, but the principle is the same.) Following this, a focused laser beam shines on the surface back and force directed by a mirror. Note that, during a scanning line, the laser turns on and off as controlled by the electronic unit. When the laser is on, it discharges the point where it shines on. After one scaning line, the drum rotates one step and the process repeats. In this way, the laser “draws” the letters and images to be printed as a pattern of (lack of) electrical charges on the drum surface. 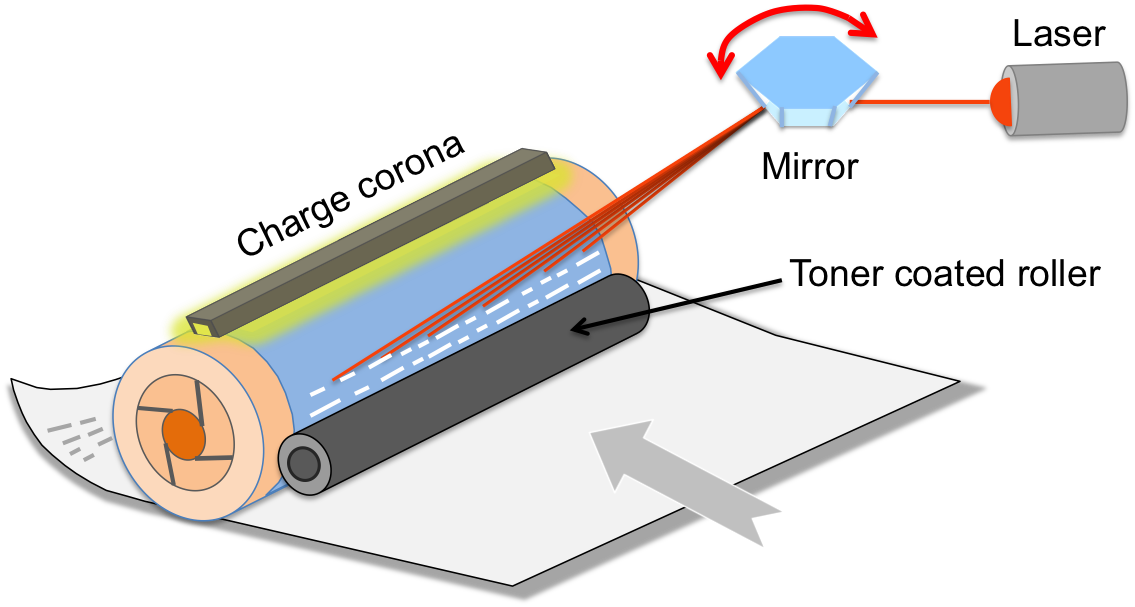 Right next to the laser unit is the Toner Hopper, which contains the positively charged toner: a fine, black powder. Since it is charged with the same type of charges as the drum surface, the toner clings to the discharged areas of the drum, but not to the charged “background” (rember, like charges repel each other). This is somewhat like writing on a soda can with glue and then rolling it over some flour: The flour only sticks to the glue-coated part of the can, so you end up with a message written in flour.

As the drum continues to rotate, it presses onto a sheet of paper, which has been charged with the opposite types of charges (positive) by a transfer corona wire (or charged roller). Since opposite charges attracted each other, the paper can pull the toner powder off the drum surface. The moving of the paper and the revolving of the drum are synchronized, so it picks up the image pattern exactly. To keep the paper from clinging to the drum, it is discharged by the detach corona wire immediately after picking up the toner.

The Laser Assembly: The traditional laser scanning assembly includes: (i) a laser; (ii) a movable mirror, and (iii) a lens. 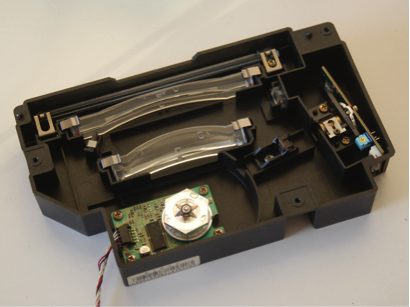 The laser’s control unit receives the page data — the tiny dots that make up the text and images — one horizontal line at a time. As the laser beam scans across the drum, the laser is turns on for every dot to be printed, and off for every dot of empty space. Instead of moving the laser beam itself, the scanning is actually achieved by moving a mirror that reflects the laser beam. A series of lenses are also used to compensate for the image distortion caused by the varying distance between the mirror and points along the drum surface. The laser assembly moves horizontally only. After each line of scan, the printer moves the photoreceptor drum up a notch so the laser assembly can draw the next line. A small print-engine computer synchronizes all of this perfectly, even at high speeds.

Toner Basics: Toner in laser printer plays the same role as ink in an inkjet printer. However, it is more than just the ink. The powder has two main ingredient: pigment and plastic. And the toner has to be chargable. The pigment provides the color that produce the the letters and images on paper. For black and white printer, black pigment is used. The pigment is blended with plastic particles, which melt when heated up by the fuser and bind the pigment with the paper firmly. This means that laser printers can print on any kind of paper and the text won’t smudge or bleed easily like that of an inkjet printer. 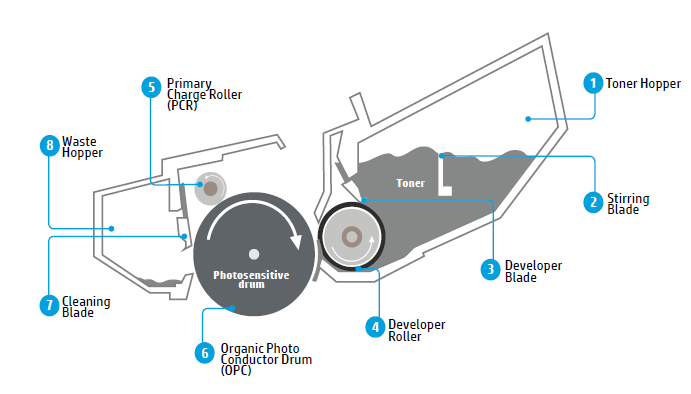 The Fuser Unit: Finally, the printer passes the paper through the fuser, a pair of heated rollers, during which the loose toner powder melts and fuse with the fibers in the paper. The fuser rolls the paper to the output tray, and you have your finished page. The fuser also heats up the paper itself, of course, which is why pages are always hot when they come out of a laser printer or photocopier. So what keeps the paper from burning up? Mainly, speed — the paper passes through the rollers so quickly that it doesn’t get very hot.

After depositing toner on the paper, the drum surface passes the discharge lamp. This bright light exposes the entire photoreceptor surface, erasing the electrical image. The drum surface then passes the charge corona wire, which reapplies the positive charge.